What is Nyepi or Day of Silence?

Traditional New Year on Bali is celebrated in March according to the Balinese Saka Calendar. The Hindu festival of Nyepi, also known as the “Day of Silence”, marks the start of the Saka year. Balinese Hindu believe that on this day Evil spirits are going out, so the goal of the silence is “to trick” those spirits, pretending there is no life on the island. Nyepi festival begins a few days before the Day of Silence and finishes a few days after. During this period different religious rituals are performed.

During festival days, you may notice Balinese women in traditional clothes carrying big decorated baskets on their head to the temples. The beautiful ceremony is held to satisfy and honor the gods with offerings such as rice, fruit, and flowers. Offerings are made daily on the island of Bali, but during religious festivals, the ceremony is grander than ordinary. On the day before Nyepi, major offerings are also made at a village crossroads where spirits are believed to pass at night.

The Melasti Ritual which symbolizes purifying is performed 3-4 days before Nyepi near the ocean and at major “water” temples of Bali. During this impressive ceremony large groups of Balinese in white clothes, along with musicians, carry decorated palanquines with important heirlooms towards the beaches where the ceremony is held.

On the New Year’s Eve streets of Bali are filling with noise and firecrackers to chasing away the malevolent spirits. This is the day when the main action occurs. The noisy and colorful Ngrupuk Parade also called Ogoh-Ogoh Parade is started after the sun goes down. “Ogoh-Ogoh” is the name of the big statues being paraded in the streets. The statues represent demons and mythological beings which would be burned after the parade as a symbol of getting rid of the Evil. Every village makes their own Ogoh-Ogoh and starts making it roughly a month before Nyepi.

In the Day of Silence Balinese follow four main restrictions:

These restrictions are carrying quite seriously by all people on Bali Hindu and non-Hindu alike. Tourists are also expected to stay inside hotel areas and limit their fun activities. This is the very special day on the island which occurs only once a year. There is no traffic on the roads, no people on the streets, all operations are shutting down including even the airport and street ATM’s! Traveling is allowed only for emergency purposes. Special community enforce patrolling the streets to watch the abidance of the rules of the Silence Day. 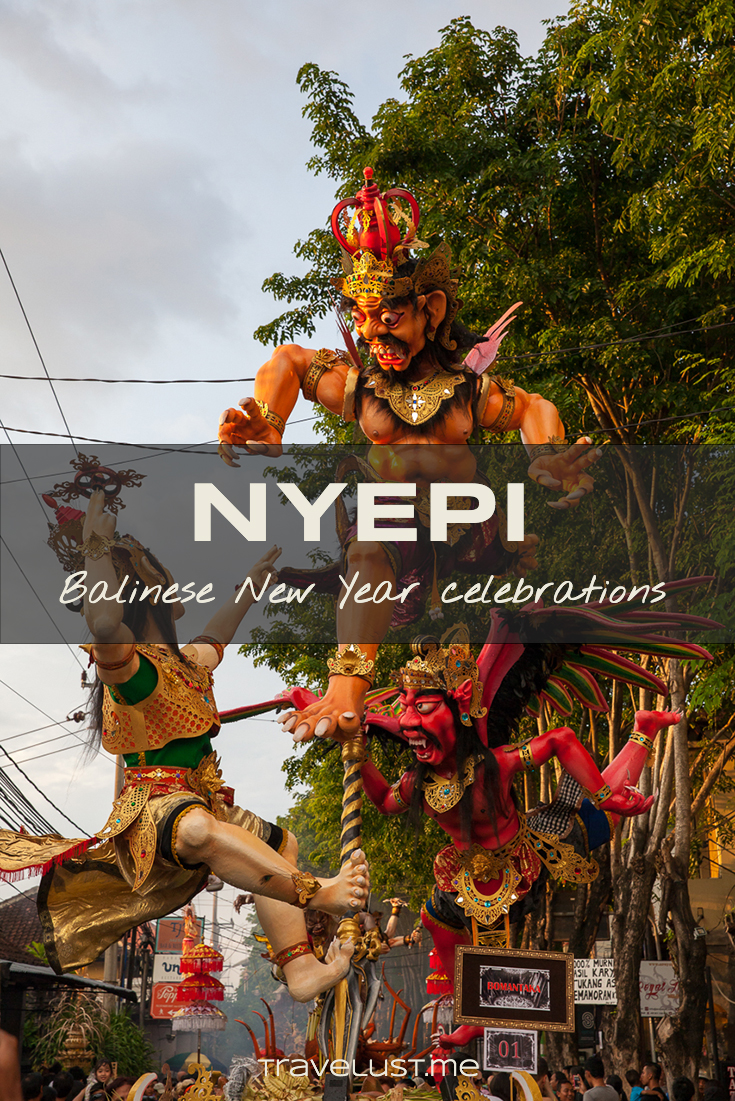 Photo credit: © Elena Ermakova. All rights reserved. Contact us here if you are interested in using our photos.