Where to find history and traditions in Seoul?

Seoul is a home to “Five Grand Palaces” built in late 14th —17th centuries by the Joseon ruling dynasty. Palaces are marvelous examples of the Korean architectural style. The most interesting ones are Gyeongbokgung and Changdeokgung.

Gyeongbokgung Palace was the main royal palace, but it was seriously damaged during the Imjin War (1592–98) and the Empire of Japan period (1868–1947). The palace was reconstructed to its original form later.

Changdeokgung Palace, the most beautiful of five, was listed as the UNESCO World Heritage Site for its “outstanding architecture and garden design”. Changdeokgung was the second palace first, but later it had been established as a primary palace while Gyeongbokgung was damaged.

The National Museum of Korea is the biggest and the most representative museum in the country. It holds the wast collection of historical and cultural Korean treasures. It is one of the largest and most visited museums in Asia. The museum is hosted in the spectacular contemporary building surrounded by a park. The museum is open daily, and permanent exhibitions are free to visit.

Leafy grounds of this ancient Buddhist temple is the island of tranquility amidst energized Gangnam district. The temple is located on the slope of Sudo Mountain with splendid views to the city.

Gwangjang Market is one of the oldest traditional street markets in Korea. Here, on the narrow crowded lines with hundreds of stalls,  you may soak up the buzzing atmosphere of an old Asian street market and try local favorites sitting on a tight bench just before a cooking vendor.

The Namsangol Village is an open-air museum with restored Joseon-era houses, while the Bukchon is a residential area where people still live in traditional Hanok houses.

Where to explore modern Seoul?

The Dongdaemun Design Plaza DDP is a remarkable futuristic building designed by  Zaha Hadid. The Plaza is a cultural hub with exhibition spaces, retail stores, cafes mixed with remains of an ancient Seoul Fortress. The DDP is located in a popular shopping and touristic area called Dongdaemun.

Seoul City Hall is a modern building in which government moved in 2012 from an old city hall located nearby. The new building is an eco-friendly project in which part of energy comes from environmental energy sources: solar, geothermal, thermal and photovoltaic. The most popular attraction of the building is the huge Green Wall in the entrance hall,  the largest vertical garden in the world.

Cheonggyecheon Park is a result of the massive urban renewal project. The recreation area was created in the place of the highway which was elevated over the Cheonggyecheon stream.

A usual city bridge turns into the world’s longest bridge fountain several times a day from April to October. When the sun goes down, the fountain is illuminated with rainbow-colored lights accompanied with music.

Myeong-dong is the main shopping district of Seoul. The lively neon-lighted streets of the area are crowded with shoppers day and night.

Gangnam-gu is the most wealthy district of Seoul with an extremely expensive real estate. It is also called “the Silicon Valley of Korea” due to the number of high-tech companies operating here. 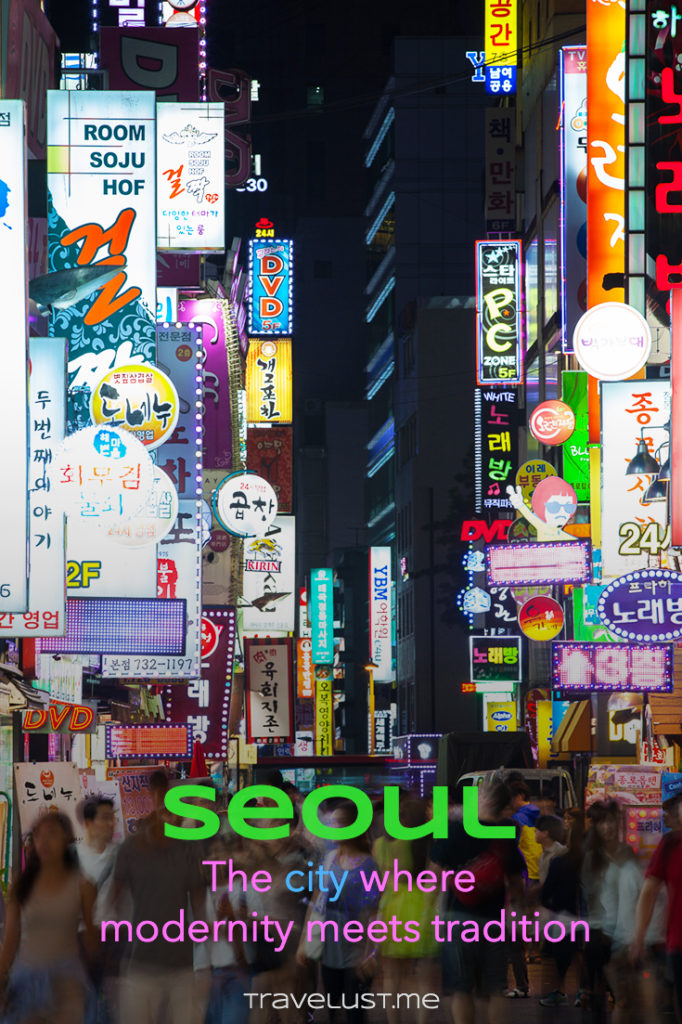 Photo credit: © Elena Ermakova, © Evgeny Ermakov. All rights reserved. Contact us here if you are interested in using our photos.